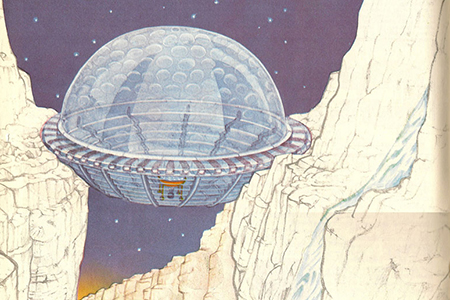 CAMPO and Black Square are looking for student contributors for their upcoming exhibition and publication
Workshop in Rome, September 1-8, 2016 / www.campo.space

In 1973, Ettore Sottsass published on Casabella magazine a text and a series of drawings entitled The Planet as a Festival. The text described the possibility of a land where all humans are free from work and social conditioning and where there is no architecture left to design. All that is left to architects in this condition is to imagine an architecture designed by “others”.

After 43 years, Black Square and CAMPO invite a group of contemporary architects to define their own Planet as a Festival, writing a description of a space intended to host ceremonies – a space capable to decipher dreams and desires that still are present in our contemporary condition.  More than verifying the extraordinary possibilities offered by technological evolution, Sottsass was interested in criticizing an era obsessed by future.  He imagined a world where cities disappear swallowed by the jungle and “production problems no longer exist. A few movements alone are sufficient, and the machines make everything by themselves in eternally repeating cycles”.

The Planet as a Festival is not a utopian project but rather the construction of a condition in which architecture can work as a device for new rituals, thus emancipating itself from the need to respond to a functional program. Architecture is then free to give space to the most profound instincts that animate collective life. It is precisely when ‘nothing is left to design’ that the mandate of architecture can be reinvented.

In this scenario, no social models are left to propose, and the rhetoric of infinite growth and development that animated the modern era comes to an end. Sottsass addressed this condition imagining architectures made by others, capable to represent dormant desires, which are in need of a form: a monolithic dispenser for incense, drugs, and laughing gas set in a campground, rafts for listening to chamber music on a river, and a stadium in which people gather to watch the stars. The projects were illustrated in collaboration with Tiger Tateishi and were intended as an offspring of the “moral of the man worker-producer”. Ultimately, Sottsass aimed to demonstrate how “men can live for the sake of living and can work to come to know, by means of their bodies, their psyche and their sex, that they are living.”

Black Square and CAMPO ask a group of architects (among which Andrea Branzi, Sam Jacob, and Elia Zenghelis) to imagine and describe through a brief narrative text the architecture that could give form and place to those rituals and desires.

These scripts will become the basis for a set of narrative drawings developed during a workshop at CAMPO within which architecture students will try to give form – as Sottsass would say – spaces designed by others. For a week, we will gather in Rome, working on these translations from text to image, and exploring and documenting those places where sacred and profane rituals and ceremonies are celebrated in Rome today, from the football stadium to the Mouth of Truth, from St. Peter to the Trevi Fountain.

Texts, drawings, and results of the fieldwork will be featured in a publication as well as an exhibition opening in Rome in September 2016.