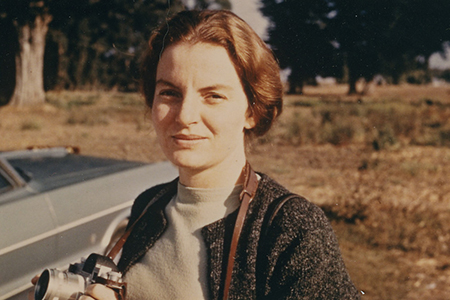 Denise Scott Brown’s recognition, from the 2016 Gold Medal in reverse

When Rafael Moneo reached Denise Scott Brown on the phone, inviting her to speak of the work of her life- and business partner Robert Venturi – in the context of the ‘Architecture in the Present’ conference at the Yale School of Architecture – she gave a bitter answer. “I’m extremely hurt that you don’t know enough about us to know that you should be saying, ‘Would I give a talk on my work, and Bob’s work, and the work of our firm.’” The lecture was eventually delivered by Alan Plattus, the current director of the School’s doctoral program, and the incident was registered as one of many instances in Scott Brown’s career when she felt called on to defend her position as a female architect, and her respective contribution to the field. A contribution which, during the long and ongoing course of her career, was often infiltrated through her partner’s practice: assisting him to plan and deliver his first design studio for Yale, editing his writings and correspondence, supporting his architectural firm in its initial, yet demanding, steps.

To the wider public, however, Scott Brown became particularly known in 2013, the year when the students of the Harvard School of Architecture Arielle Assouline-Lichten and Caroline James, through the ‘Women in Design’ activist group, initiated a petition for the retrospective recognition of Scott Brown with reference to the nomination of the 1991 Pritzker Architecture Prize. Overlooking the common path of Denise Scott Brown and Robert Venturi in the field, the Pritzker commission had awarded the prestigious prize only to the latter. Twenty-two years after the original nomination, the petition #PritzkerForBrown was rejected; nevertheless, it gathered more than ninety thousand supportive signatures and for the first time turned the spotlight on Scott Brown and, again, on the recognition of women in the field of architecture.

“What are they doing here?” Scott Brown wondered the first time she entered the School of Architecture at the University of Witwatersrand, Johannesburg – referring to her male co-students. Denise Scott Brown was born in Nkana (Kitwe), Zambia in 1931, she grew up in the Dunkeld suburb of Johannesburg and she was one in just five female students in the 1948 class of architecture, which counted sixty-five students in total. It was her habit to sign her early drawings with her full name, so as to accentuate her female identity. One could identify her strong will to be involved in, and contribute to, the architectural practice – a strong will that had previously characterized her mother, Phyllis Hepker, as she had earlier been enrolled in the same school, before discontinuing her studies during the second year. It was her mother who had, in the course of the 1950s, instilled in the young Denise an enthusiasm for the city of Las Vegas – a city that would so significantly mark her enquiries into the interpretation of urban space. It was her who had signed her up for art classes at the age of ten, where she would learn to “paint from what’s around,” so as to awaken and foster her creativity. And it was eventually her who had influenced Denise to believe that architecture is a female profession. One only needs to be reminded of the unspecified collaborations between Charlotte Perriand and Le Corbusier in France, of Lilly Reich and Ludwig Mies van der Rohe in Germany, of Franco Albini and Franca Helg in Italy, of Aino Maria Marsio-Aalto and Alvar Aalto in Finland – but also of the case of Zaha Hadid, who had attributed the small number of built works in the United Kingdom to the fact that she was, among other things, a woman – to shed new light on this reflection.

Following the award of her architecture diploma in Johannesburg, Scott Brown continued her studies in the Architectural Association School of London (AA), graduating from the latter in 1955. It was the same year in which she married the architect Robert Scott Brown, with whom they collaborated closely and relocated to the United States in 1958, one year prior to his death, in order to enroll at the University of Pennsylvania. The years in the AA laid down the basis for Scott Brown’s architectural formation and later practice. On its premises, she had the opportunity to make contacts with key figures of the architectural scene of that time, namely Otto Königsberger, Arthur Korn, Maxwell Fry and Jane Drew – the last two, except from collaborators of Le Corbusier in the Chandigarh project, they were also founders of the Department of Tropical Architecture in 1954, in which Scott Brown was enrolled. “Don’t think about teaching as, can you do it? Think about it as, you have a duty to pass on what you got,” Korn had advised Denise, taking into account her privileged Anglican origin in the varied social context of Johannesburg, in which she had been raised.

Gathering experience in the architectural firms of Ernö Goldfinger, Denis Clarke Hall and Frederick Gibberd on a broad range of projects, from residential buildings to hospitals, it was not long until Denise would take Korn’s advice on board, as she engaged herself in teaching activities, already from the first years of her studies at the University of Pennsylvania and later on at the University of California at the cities of Berkeley (1965) and Los Angeles, among other institutions. It was during that period that she would meet Robert Venturi – co-founder at that time of the Venturi and Rauch firm and member of the University of Pennsylvania faculty. Scott Brown and Venturi met in 1967 and collaborated both in the projects of the firm and, subsequently, in the design studios taught at the Yale School of Architecture. Yet, it was just in 1969 – two years after their wedding –, that Denise became an official partner of the office, which was eventually renamed to Venturi Rauch and Scott Brown, and received her first salary for her contribution to its projects. Among the latter, the Fire Station Number 4 (1968) at Columbus, Indiana, the Gordon Wu Hall (1983) at Princeton University, New Jersey, and the Sainsbury Wing extension of the National Gallery (1991) in London are to be found.

The building that would influence their further practice was, however, their first residence: the Vanna Venturi House. It was a project designed by Venturi in 1964 for his mother, in the Chestnut Hill neighborhood of the Northwest Philadelphia, on a flat site, completely covered in trees. Much later, in 2011, the project would form part of the Victoria and Albert Museum exhibition, entitled ‘Postmodernism: Style and Subversion, 1970-1990’ and curated by Glenn Adamson and Jane Pavitt (24 September, 2011 – 8 January, 2012). Organized around the element of the hearth, the diverse living spaces of the house have often been regarded as applied reflections on the notions of complexity and contradiction. Both these terms composed the title of Venturi’s magnum opus published in 1966, in the editing of which Scott Brown had an active role and about which she will talk at the forthcoming symposium, marking its 50th publication anniversary, at the Museum of Modern Art in New York (10-12 November, 2016). Succeeding the white, austere, orthonormal forms which had prevailed among the products of the Modern Movement, the Vanna Venturi House suggested the revision of residential architecture through a return to archetypal forms, this time enhanced with alternations in symmetry, perspective and scale. Alternations which can be also retraced in the photographic documentation of the city of Las Vegas, which framed the drawings of the house in the ‘Postmodernism’ exhibition’s layout – introducing the visitor to the 1:1 scale reconstruction of the Garagia Rotunda building (1976-77) by Charles Jencks, a snapshot of Piazza d’Italia by Charles Moore (1975-77), a collection of furniture by the Memphis group and the costumes donned by Grace Jones surrounded by the sounds of David Bowie; in their entirety forming distinct members of the postmodern organism, which Scott Brown and Venturi were seeking incessantly to define.

The photographs from Las Vegas signified, nevertheless, something more immediate for Scott Brown and Venturi than the growing influence of the postmodern architectural movement. If the residence dedicated to Vanna Venturi had shed a fresh light on the well-established facts of residential architecture, then the photographical notes from the city of Las Vegas would similarly provoke the well-founded methodologies of architectural education. An analogy which agrees with the fact that they never regarded themselves as academics, but rather as professional educators: they both designed and taught. In this context, in 1968, Scott Brown and Venturi – in collaboration with Steven Izenour, their teaching assistant at that time – accompanied thirteen students of the Yale School of Architecture to a field trip to Las Vegas. The trip was part of the design studio they held, which had borrowed its title from the city it drew upon and was to mark their common scholarly path. The trip findings had led to the renowned publication ‘Learning from Las Vegas, or Form Analysis as Design Research’, as well as to revised pedagogical methods, through the use of visual media, the application of in situ urban research and the intersection of observation and design. The emphasis they placed on mass culture and the lower- and middle-class taste would eventually function as a counterweight to the strict aesthetic exhortations of the Modern Movement. Promoting the popular, folk environment as an element of the architectural domain and sphere of influence, the Las Vegas studio was deeply founded in the broader educational methodology of Scott Brown, in which design and research were interlinked and conversing perpetually.

From the first design studio for the Yale School of Architecture, entitled ‘Mass Communication on the People Freeway, or Piranesi is Too Easy’ – that explored concepts of urbanism and openness through the redesign of a part of the New York subway – to the posterior design studio for the Harvard School of Architecture, with the title ‘Architecture of Well-Being’ – which looked at various architectures of health, on the social as much as on the individual level –, the close relationship between research and design, urban planning and architecture, crossing the entire practice of Scott Brown, remained present. As a consequence – for her built work, her educational and scholarly contribution –, Scott Brown was recently awarded, together with Venturi, the 2016 Gold Medal of the American Institute of Architects. Apart from marking their recognition to the field, thirty years after they had both received the President’s Medal of the Architectural League of New York (1986), this nomination signified the first time that the Medal was granted to a couple of architects. This recent distinction, occuring shortly before Denise will turn eighty-five, on October 3rd, provides a good reason for underlining the need to re-evaluate her professional and biographical paths, but also for repeating the question ‘Room at the Top?’ – which she herself had posed in the homonymous 1989 article about sexism, the star system and architecture –, many years after she had perceived the ratio of female to male architecture students on the first day of university.