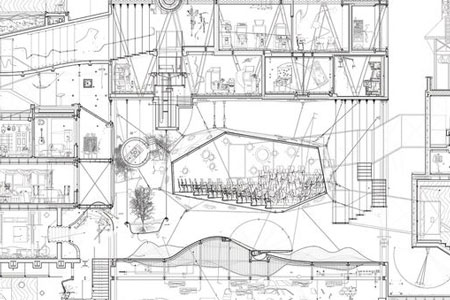 What does it mean to be contemporary? Obvious answer: every architect is contemporary to his own time. Leon Battista Alberti, Mies van der Rohe, Ippodamo da Mileto and Aldo Rossi are all synchronous with the culture of the times in which they have lived. How couldn’t it be? It is tautological: we are all contemporary to our own time because we live in it.

Maybe, one could be non-contemporary if he or she designed in the same manner as it was done in the past. This one would not be our contemporary, nor a contemporary of the ones he is referring to.  Nonetheless, we know that some architects have tried to refer to pasts’ ideologies as alternative forms of contemporaneity in their own time, one example being William Morris. Is William Morris a contemporary of Gustave Eiffel or not? Most likely yes. As we see, then, the question of the “contemporary” is a difficult one; one that needs a complex answer. Last chapter in this discussion is an essay recently published by Mario Carpo, entitled “Post-Digital “Quitters”: Why the Shift Toward Collage Is Worrying”. In this text, Carpo seems to be arguing that contemporary architecture should be the expression of the era we are all living in; namely, the digital one. In an inexcusable gesture of reduction, Carpo’s argument can be described as follows: architects shouldn’t “quit” the “digital”, but rather keep on working on its agenda, avoiding any temptation of going towards the so-called “post-digital”. Furthermore, in rebutting the need of discussing the use of technology in architectural design, Carpo – as usual – provides us a truly important issue that we need to keep in mind: “Architects cannot do without technology, but technology can do without them.”

Still, while recognizing the consistency of Carpo’s argument, it shouldn’t be necessary to accept the fact that one should be “digital” in order to produce valuable architectural contents; after all, the examples to prove it are so many, that it would be annoyingly boring to mention them in this context. Probably, then, the problem has a linguistic nature, that is to say: the problem lies in what the words “digital” and “post-digital” have ended up meaning. Therefore, it is at first needed to understand the reasons why terms like these are so successful today. The reason for such a success might actually be simple; almost obvious: by using these words, we think we are real contemporaries to our own time, we imagine to be part of something like a Zeitgeist. Words like these, refer to “systems” of thought, providing pragmatic and poetic guidelines.

Imagine to have a poetic or a theory in your hands. In order for it to be successful, you have to communicate it and, to do so, you must define methodologies, operations, processes and the various possible justifications allowing your work to be ideologically optimized into a system; whether this one is the “digital”, the “post-digital”, or any other label you may care to mention. The result? Often, is nothing more than a commentary: the by-product of rules; the umpteenth iteration of rhetoric, ideological and formal clichés.

Indeed, the existence of clichés is not anything particularly surprising and, needless to say, it would be stupid to condemn an architectural genre (whatever it is) because of the existence of trivialities and simplifications. After all, these have always existed, as there have always been interesting works and masterpieces, whether they were classical or baroque; modern or post-modern; digital or post-digital; rock or jazz; the Beatles or the Rolling Stones. Yet, the obsession with words and definitions like the ones of “digital” and “post-digital”, is actually more timely than that. In fact, it is quite easy to see how the need of defining tendencies (the demand for systematic thinking), originates from a very contemporary need. A need that comes from the more and more managerial nature of the profession, from the necessity of defining academic protocols for funding and from the maintenance of disciplinary taboos and dogmas. To cut the story short, such a timely condition can be defined as the logic of “legibility”. In other words, one should account for the fact that the more a cultural product is a legible “good”, the more chances it has to be recognised as something valuable or as something worth to be funded or bought. The system is, then, the most performative and optimizing way of developing ideas: it reproduces contents, creating values that pre-exist the “original” work, then, legitimising it.

It is perhaps Walter Benjamin’s insight transformed in the prophecy of the mainstream: we no longer find “art” in front of our eyes, we only see reproduction. More than seventy-five years after Benjamin’s proclaim, and more than fifty years after Andy Warhol’s statements, today’s communication is not only redefining the “aura” of art (and the one of architecture), but rather creating a new one: reproduction and communication become such strong, fundamental and intelligible values to substitute the old notion of aura. The work of art has an aura only if it is communicated; only if it is sold and shared. In order to obtain such a result, it has to be readable; it has to be systematic and “well” defined. It couldn’t be otherwise: in front of the “horror pleni” of images in which we are immersed, agendas such as “digital” or “post-digital” provide identities. Identities that, according to the general understanding of these words, can be defined as follows: to be digital means to be interested in exploiting technology to create novelties, while to be post-digital means to be against the fetishizing of processes and methodologies. The former develops new forms and concepts out of new technological possibilities (folds, blobs, fluidity, emergent aesthetics, swarms, discreteness), the latter is interested in figurative qualities (collages, figures and representation), narrative and meaning. The only problem, today, is that, in front of our culture’s dizzying heterogeneity, the attempt of narrowing down architecture to one single agenda (digital, post-digital) cannot be else but a – more or less innocent – ingenuousness. An ingenuousness that becomes a conceit when it is said that all of “Architecture must be based on this methodology”. A conceit that becomes cultural oppression when such a methodology is meant as the only truth for architecture, rather than being considered as one among the legitimate truths. In this respect, technology is often used to justify these kinds of conceits and ideologies; it is used to define a “–ism,” or the newest and annoyingly boring “system”. So much so that the debate between the “digitals” and the “post-digitals” seems to actually be the latest iteration of one among the oldest questions in architectural theory and its historiography: is technology the driving force of architecture?

Following Carpo’s argument, the answer to this question seems to be clear: yes. Once again; it is an old story. A large number of architects, among the ones who proclaim technology to be the driving force of architecture, have always claimed the superiority of their work because of its technological “qualities”. It actually is the logic of determinism: technology determines the future. Notwithstanding such a view on architecture, history and culture, one wonders if there is any chance to engage technology differently. Indeed, the architect uses technology, yet, the problem is how to use it. In fact, and unlike the optimizing “thinker” and the engineering tub-thumper, the architect is interested in technology, not because its products are novel for the simple fact of being “technological”, but rather because technology is one of the many media we have at our disposal and through which we can produce estrangements, new contents; new desires. For instance, the maison dom-ino wasn’t the simple application of new technologies, it was the expression of a creative and cultural desire mediated through technology.

Technology is judged to be an architectural value when it is not simply used to produce new linguistic rules and normative guidelines (this -ism, that meta-, this post-, that hyper-), but rather when it estranges these very categories; when the product of the design is not the product of supposed universal laws. The problem of architecture today is not whether we should deal with technology or not, but rather: how. Take the catalogues of fairly important international exhibitions, for instance the Lisbon Triennale, the Chicago biennale, or the one in Tallin. It is easy to see how architecture, whether it is built or designed by using robots and drones, or by piling bricks with humans’ bare hands, creates worlds, ideas and concepts.

So much so that the whole point of designing architecture would seem to be the constant attempt of testing new ideas, new forms and new concepts. To try out that particular place, that specific use of a space, that form, that technology, that specific kind of representation, that formalization of a concept. The objective of all of this messy production of ideas might actually be quite simple: to generate something that talks about ourselves, about our world and our culture, by reinventing the common-sense.

The power of architecture is far from being the simple use of technology, it lies in the architects’ ability of sensing and testing the limits of what is considered to be possible (formally, linguistically, politically, technologically, representationally), whether he does so by drawing figures, or by coding. In fact, differently from a purely technical object, which is self-referential (it has a technical purpose and it presents such a finality in its forms), architecture produces meaning and signs that are beyond its technical features.

Thus, through architecture, the domain of possibilities is extended, whether digitally or analogically. This seems to be a more interesting vocation than the simple use of technology: opening possibilities, breaking up with the common-sense, abandoning categories and systematic ways of thinking.

Then, it is possible to affirm that the problem of designing architecture today might actually reside in the attempt of producing and/or critiquing beauty, in the invention of contents and in the attempt of opening new and unforeseen possibilities negotiated with conventions.

Technology is one of the architects’ tools, but surely not the only tool we have. Consequently, the problem of architecture’s relationship with technology, which is to say its relationship with the notion of “contemporaneity”, it is not a matter of quitting something or not.

Rather than asking ourselves if we have to use technology or not, we should probably ask: how should we use technology? What are our purposes?

Architecture is not a matter of binary logics (modern/postmodern; digital/post-digital), but rather a matter of fuzziness: a matter of thought, reasoning and imagination.