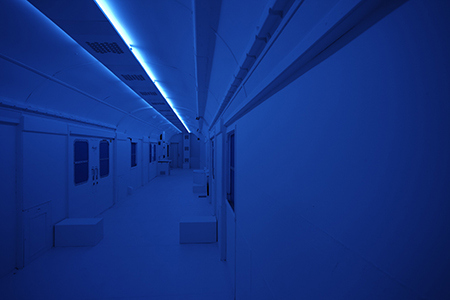 In spring 2010 the German sound artist Robin Minard presented a performance-installation entitled Sounding D throughout Germany. The original idea of the project was to build a “listening object” across some major cities in Germany, at the time of a series of musical events, festivals, and concerts, in order to gather the sounds recorded into a geo-referenced on-line database.

The outcome of such concept was accomplished by using a train with three carriages: two for the recording equipment and one for a site-specific installation and the organization of 150 concerts around Germany between the 25th of August and the 12th of September of the same year. In 19 days the train visited 15 cities around Germany, from Dresden to Eisenach (J.S. Bach’s hometown), by stopping in 225 different recording points along the route. 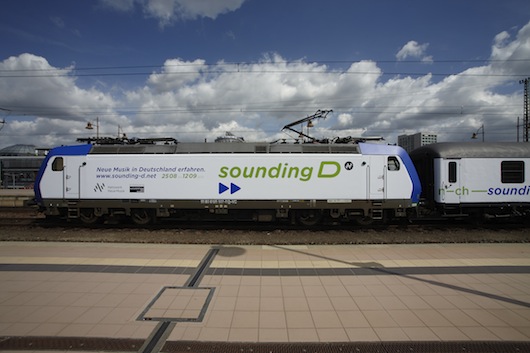 The recording locations were partly the place where the concerts were played and partly just interesting acoustic observatories in the cities. The recording equipment used in this project has been effectively used as a sensing device to register and describe a set of landscapes taken from geographically distant sites. The data collected in the different cities during the travel then became the fundamental elements of the installation Outside In (Blue), in the third carriage of the train. The carriage was transformed in a room for listening, acoustically and visually detached from the external environment.

The passengers of the train were able to listen to the sounds recorded during the performance, while assisting to a choreography of lights effected in their intensity by the variation of the music. The train itself was transformed by this action in a «œuvre d’art mobile» (p.142), allowing the listeners to recollect the sonic images of the various locations in a “third landscape”, unique in its perceptive extent. 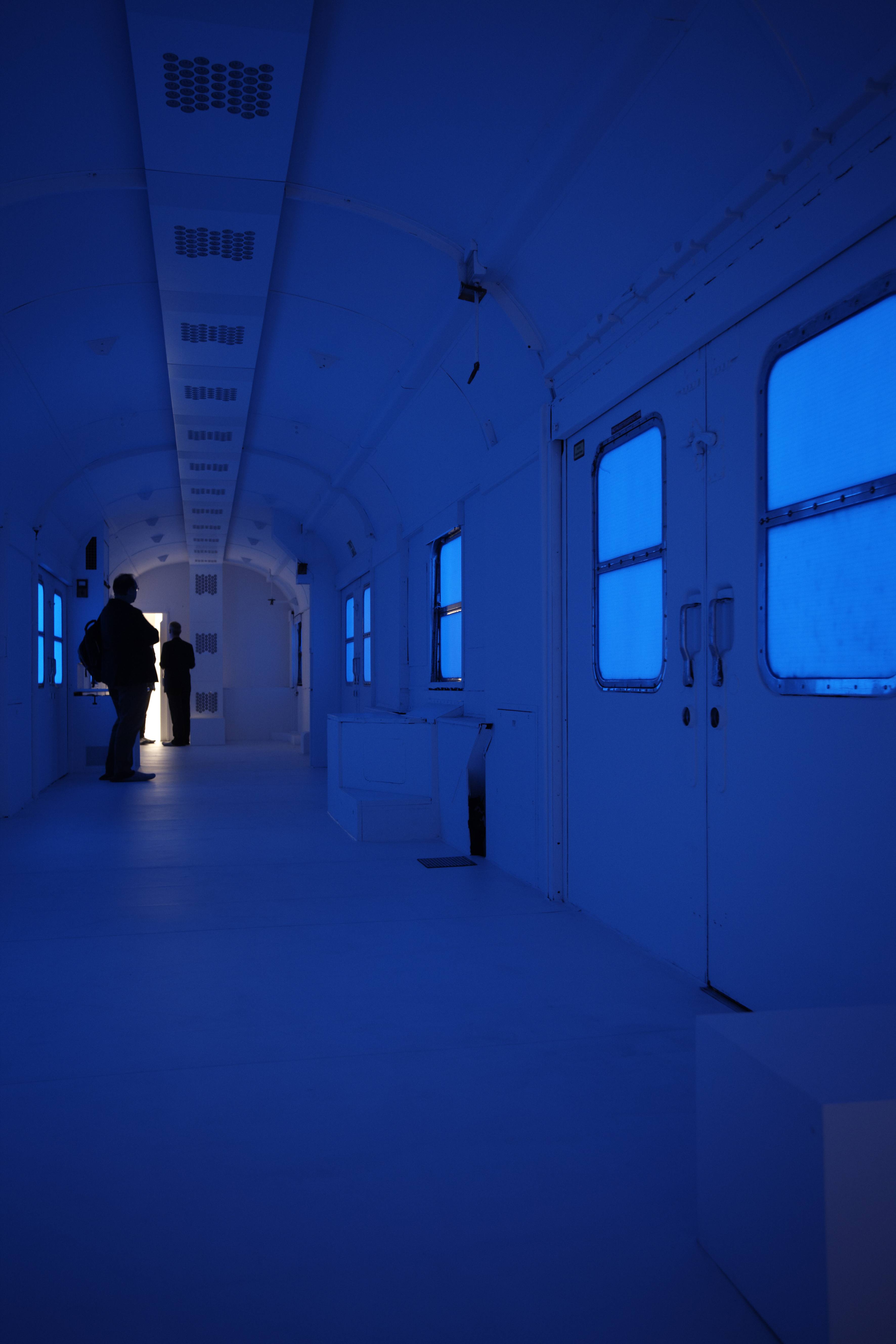 The database is now available on the internet for other users to be continued and completed. The interface used to communicate the experiment (http://sounding-d.netzwerkneuemusik.de/) is based on a digital map of Germany on which 15 pins represent the 15 cities visited by the Sounding D train. Each pin has a moving halo that shows which track is being played at the moment of the research. Different tracks from different cities can be also played at the same time recreating unexpected acoustic scenarios. By clicking on the pins the user can zoom in the city and see in greater depth when and where the sounds were recorded.

Many are the interesting perspectives that the installation and performance brings in regard to the use of microphones as sensing system. The device is used as an instrument to sound the landscape and to extract sensorial information from it. The online interface then allows the user to freely recombine the tracks according to his own interests and scopes. The installation on the train is conceived as a platform within which the data are embodied and diffused to construct an immersive environment for the listener. The sensorial perception is augmented in respect of the hearing, while the images of the places are substituted by interactive lights that change their brightness interpreting the sounds and the shifts of their frequencies. It is down to the listener to experience the landscape suggested, the “third landscape”, the one constituted by the sounds recorded from the physical landscapes and now overlapped to build a scenario that only the senses and the imagination can recreate.

In this sense the project provides a relevant example of a convolutive landscape, as the data extracted from the reality through a sensing tool provide the components of a landscape which is a variation on the original equation: the landscape constructed by the invention of the user of the application is the sum of tracks recorded live, but then their combination is up to the user and his sensorial openness.

Similarly in the carriage of the train the immersive experience is effectively a designed landscape where some of the feature are programmatically controlled by the artist and connected to factual places, while the behavior of other elements is more unpredictable and randomized. The installation overlaps the recorded tracks with recordings coming from the room itself and therefore adding an amount of noise to the landscape designed. The visitors can use those plain blue walls to draft their own impressions of the landscape heard. The environment will be constantly modified by their presence in the room.

The present project proposes spatial conformations which unmistakably search for a hybrid aggregation of digital media and organic operators. The work fosters an interaction between the two entities in order to recreate an artificially tempered ecology around a sensing body. People are involved in the processes as possible activators of environmental transformations in order to regulate the spatial features according to subjective behaviors and cultural dispositions.

The case study triggers participation in landscape framing exploiting locative media, in particular sensors, to involve people in deepening some characteristics of the surrounding environment. While Sounding D exploits interactive lights. Its functioning relies on microphone and acoustic sensors. The Sounding D model fully integrates the sensorial involvement of the users as a tool for “sense making” and “place making”. The stimulus of artificial and human sensors as part of a continuous design process can achieve interesting levels of spatial inclusion, as the latter space that the project can embrace is the body itself. Especially in the third example, the cultural meaning of what is perceived is produced by the mind through the body.

The exploration of the hidden potential in the participation of the body in landscape configuration reflects on the concept of proximity as presented by the philosopher Emmanuel Lévinas. For Lévinas proximity is intended as the “immediacy of presence”, it is «a relationship with a singularity, without the mediation of any principle or ideality. This notion has nothing to do with spatial contiguity.

Proximity is a new ethical intentionality» (Wyshogrod, 2000). One of the means through which participation is achieved is the use of a digital interface to gather the data collected through the sensing and then to make them available to the users. Although The Sounding D website is very clear and easy to use, its interraction and updating are very limited.

The user can easily understand the project and the process that leads to it, but there is not neither the possibility to upload new material yet, nor to add new pins to the map. Benjamin’s project faces this issue relying the data exchange on the use of a text message system and on the change of intensity of the light directly on the architectural envelope drowned into the water. This strategy conceives the device itself as a spatial object, whose shifts and transformations can cause a significant modification of environmental parameters.

A connivance between what is digital and what is analogical is created. The interdependence of these two elements allows to gain continuity between the space and the body during what we can identify as a process of spatial definition. This continuity, described by Brambati as «résonante et “sympathique”» moves toward a type of spatial form which softens its edges and blurs its boundaries, like a dynamic palimpsest. It is indeed a form whose functions are multiplied and made more complex, as the support of digital media augments the possibilities of exchange and mutations: as McLuhan used to say in his studies on the sensorial relevance of media «In this mild form everyone could play many roles.

A new level of perceptual variety and stratification can be achieved, helping the body to reconnect to its habitat and its environment from a less fragmented and hyper-specialized approach, toward a more flexible tendency: «such flexibility naturally tends toward the organic. Human sensitivity seems once more to be attuned to the universal currents that made of a tribal man a cosmic skin-diver».

Finally, the employment of sensors and sensitivity in spatial design seems to involve also a tension toward an ecstatic rendition of the landscape, by means of which the factual essence of the place is transfigured and internalized by the users. In Robin Minard’s project, the attention orientated towards an acoustic and sensitive discovery of the landscape appears to aim for a deeper integration of the mental and the physical knowledge of the place. The outcome of this process includes a certain amount of arbitrariness due to the necessity of allowing freedom to the final user to experience the landscape itself.

In this case the landscape is not even a singular identity but it becomes an entity that entails a number of different and various sensorial conditions under the same spatial structure. However, the more the device allows a transparent and free access to the information and the contents, the more the framing of the landscape can happen with a genuine interest from the side of the user, establishing a more secure guarantee of hi sincere attachment to the survival of the same environment.